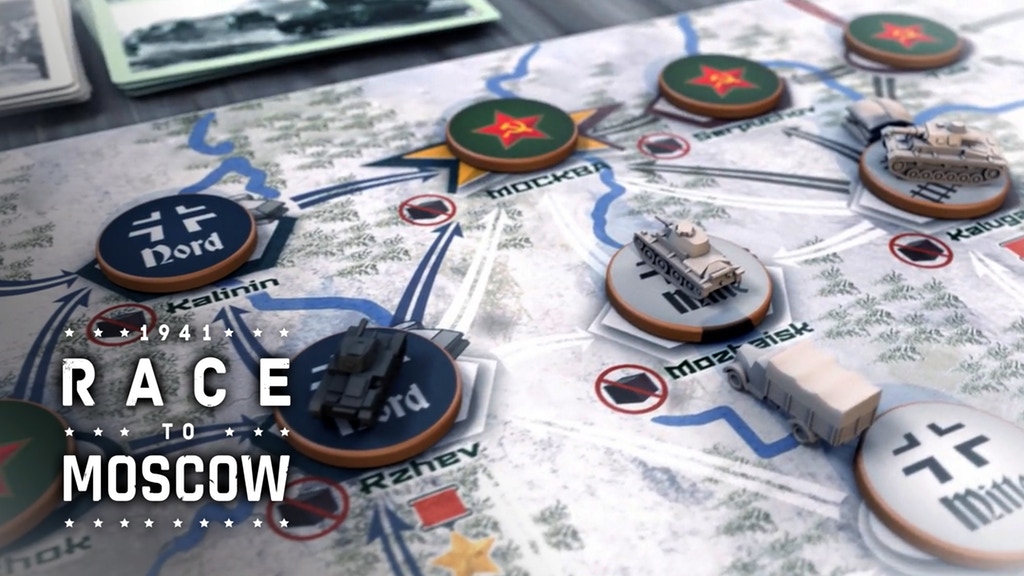 How to plan and execute the largest military campaign in history? Find it out in 1-3.5 player, 90 minutes logistic take on Barbarossa.

Latest Updates from Our Project:


I hope you are all well and staying healthy.

We have received updates from our Chinese shipper and they are not very optimistic. The congestion on the railway still hasn't been resolved and the Khorgas loading station has its hands full, while we still haven't been able to get on a container and send components on their way. We have informed you that shipments to backers will take place in October 2021 and we hope that this date will not change. In the meantime, we are looking for alternative transport routes - in case of any changes or new information, we will keep you informed.

The shipper has informed us that they have sent us a shipment of plastic components and mouldings by courier. For now we have only received photos, but when we receive the product we will try to show you in more detail.


I hope you are all keeping safe and remain in good health.

Finally we managed to get detailed information from the forwarder. It turns out that the shipment of our components has moved back even further and still has not left, which is not very good information either for us or for you. We thought that packing would take place soon and that shipments to backers would be made at the end of May/beginning of June. Apparently, these were overly optimistic expectations.

Due to the lack of metals, manufacturers still do not have the material to build new containers, so the few that are present are being used for transportation. In addition, Chinese New Year caused another delay, which also affected our transport. With too many things being postponed from one day to the next and the queues on the railways still very long, it is difficult for us to predict whether we will still be able to start transporting components this month, or when next month's transport could start - our freight forwarder is also having trouble with this. So much is happening and so much is changing from day to day.

This is what has forced us into an uneasy decision. We have to postpone shipping to backers until October 2021. It may be possible to start shipments sooner. This time we don't want to repeat the situation where we have to postpone shipping from month to month for external reasons. We know that hope deceives, but we are keeping our fingers crossed that this will be the final postponement of the shipment date to backers. Should anything change, we will keep you updated.

We are currently testing a new solo variant (with a revised map that will be on the other side of the board).


The game has been produced. All the components have been manufactured, and most of them are already waiting in the warehouse of the company that will complete the games. What is holding us up is the delivery of the components made in China. This is very unfortunate.

In recent updates we have reported that the logistics industry is experiencing huge queues, delays and shortages of equipment that prevent transportation from functioning properly. Last week we were informed that there have been some issues with the shipping of the components. We have been investigating the situation over the last few days and have been in contact with our forwarding agent - it appears that the situation is now very serious.

There is a shortage of transport space at loading and unloading stations and the queues are enormous. All companies - including electronics and clothing giants - want to be in time for the Chinese New Year. There is also a shortage of people to carry out the work while maintaining health and safety. And, more importantly, there is a shortage of containers for transporting goods. There is serious congestion on the route from China to Europe, with waiting times for transport having increased by 50-90%, and this is not helped by the fact that loading stations have reduced capacity, further delaying the process. The city of Khorgas, which lies on the route of our transport, is also facing such circumstances, which may affect the date of our delivery.


The freight forwarder has informed us that, although everything has been ready for a long time, our shipment has again been moved backwards in the shipping queue. We now know that the shipment will not leave China before Chinese New Year. This means that our planned and agreed packing will not take place at the end of February or even in March. Optimistically, we can expect the game to be completed in April, with the first shipments starting to reach backers in late April/early May.


We are very sorry about that. We are unfortunately hit but is happening at the moment in the world, in the logistics and transport industry. We can only hope that everything will soon be back to normal and that we can return to our working as we used to.


We have managed to get information about shipping to the United Kingdom. The good news is that our product is mostly made in Europe, with only a few components coming from China. We won’t bore you with all the details here - the important thing is that shipping to the United Kingdom will run just as it would have before Brexit, with no additional costs for the backers. Some good news at least.

We know that the additional months of waiting are far from ideal for all of us. The game should have hit backers some time ago, but the global situation, which is negatively impacting many industries, has scuppered our original plans. But we would like to reward you for your patience during the months of waiting, so as soon as we received the message from the shipper we decided to prepare something special for backers - the game board will now be double-sided and on the other side there will be a new layout enabling players to play the game in an improved solo mode. This will require the creation of the board from scratch, but as it will be developed locally we will be able to do it in time for the arrival of the components from China.

The game will be sent out to backers in June 2021.


I hope that you all you remain safe and healthy.

We recently realised that we have not yet presented the packaging design for the Axis Aircraft Expansion. It will contain a set of three Ju87 and one S.boat miniatures. What do you think of the box layout?

The news from the producers is moderately optimistic. A week ago we've learned that the game components will ship later than planned just. Thus and due to the still ongoing global delays, we cannot promise that the game will be completed in February, which means that shipments will start in March at the earliest. We'd prefer to prepare you for the possibility that the game might eventually reach backers in April 2021. We don't know for sure yet, but from experience we can estimate that some of the final steps will take longer, or there will be further delays or problems beyond our control.


I hope you are all safe and okay.

We received samples of ship models from the manufacturers, but it turned out that one of them has a different color than the one we chose. So, we asked the manufacturers to send us new samples - this time in the correct color. Unfortunately, it may turn out that this oversight on the part of the manufacturers may delay the delivery to backers.

We prefer to let you know in advance that the games may not reach you in December. We are still receiving information that many industries and our suppliers simply have too much work and too few employees. In addition, new restrictions are being introduced, which is causing additional delays above what we expected. Therefore, it is better to prepare you for 1941: Race to Moscow only reaching you in January or February 2021.

We received some mass production samples. The others are waiting for transport.

We have been cursed. One could say... a logistics game facing logistic problems. We have received information from the manufacturers today that there is currently a shortage of containers for the shipping of game components. This is a serious inconvenience, as the pre-Christmas period is approaching, with production and shipments being more intensive than at other times of the year.

As in 1941: Race to Moscow we have the supplies, but we do not have the supply lines to deliver everything to where we will eventually complete the games and ready them to be sent to backers.

Lots of backers of 1941: Race to Moscow placed an order for Fire in the Sky and are perhaps wondering what will happen with this game too. If you don't follow our social media, you may have missed a major update on Fire in the Sky. Please read the following note about this.


We would also like to remind you that you can try out 1941: Race to Moscow on Tabletopia.


Stay safe and take care of yourself!